This month’s IRL event was specifically intended to help get the ball rolling on preparing our space for MozFest (Mozilla’s big annual open-source technology bash held at Ravensbourne College in North Greenwich ).

We were really chuffed to get our proposal accepted for a space in the Decentralised Zone which we’re going to use to tell people in the open-source community about the Commons Platform, let them see where we’re at (we should have our temporary site fully functioning by then) and where we’re going to be and interact with them about how they might be able to utilise it in future. Obviously they’ll be able to join us as well if we don’t put them off with our wild-eyed enthusiasm!

We’re also hoping to conduct streamed conversations with various interesting people about decentralisation and how it relates to their projects and how all of that relates back to the Commons Platform. Should be fun if we survive the intense roller coaster of stuff we’ve got lined up between now and then……

…..which brings me not-terribly-neatly back to the IRL event at the Redmond Community Centre on last Monday night (October 8). One of the themes that has emerged from the fertile brain of Ms Varlow over the last while has been describing our approach to decentralisation as a being like a Jellyfish. Yup. Or indeed, like a herd of Jellyfish. I know Jellyfish don’t come in herds but bear with me. (FYI, they come in Swarms, Fluthers, Smacks and Schools. Believe me, I have come to know more than I would care to about the medusa-phase of gelatinous subphylum Medusozoa.) Says Sophie Varlow – and she says it often, sometimes at breakfast – “It’s the way they contract and gather-in resources and then expand to move forward. That’s how we work as a project. Its also a visual way to describe how our groups are formed and how the values and functions replicate throughout each part of the organism in a decentralised way.” Ok I might be paraphrasing her but, really, she says stuff like this all the time. You have no idea. Anyway. It’s a visual, visceral, gelatinous thing so perhaps its better if you just cast your eyeballs across the accompanying photo. 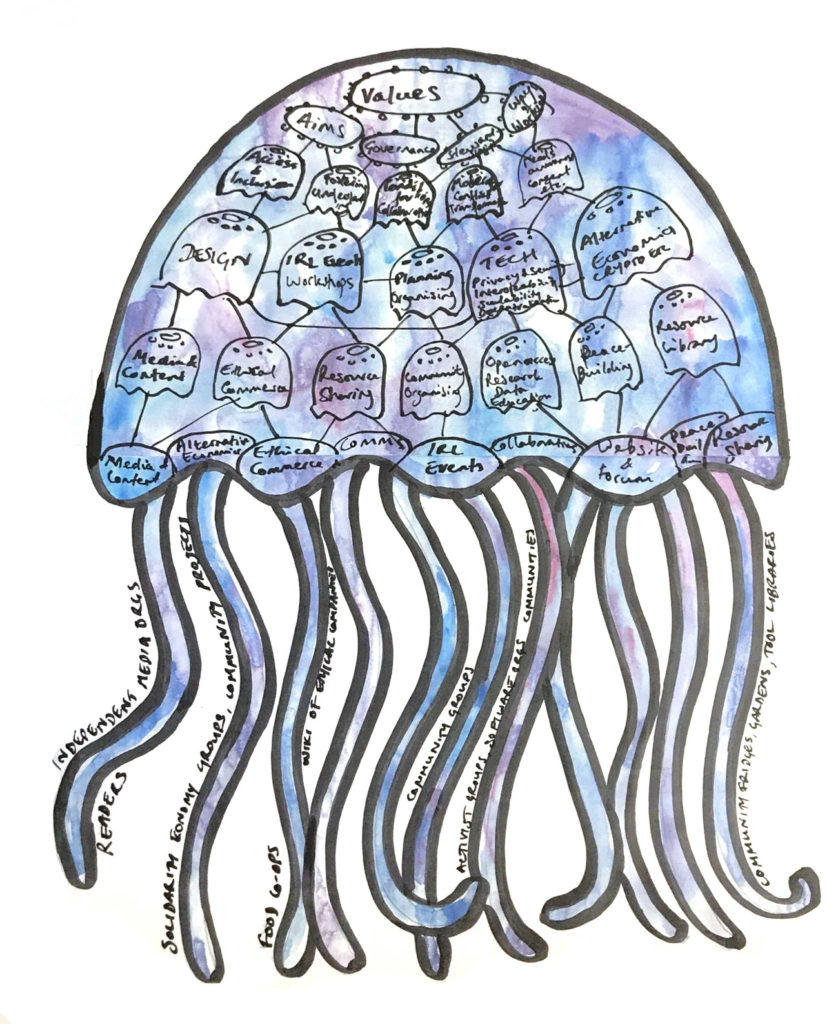 Jellyfish are also taking over the oceans by behaving like free-swimming jelly-activists. Possessed of an apparently impeccable sense of outrage, they’ve shut down a few nuclear power stations, halted diamond mining off the coast of Namibia, disabled the aircraft carrier USS Ronald Reagan and incapacitated 127 Philippine police who had waded into the sea on a counter-terrorism exercise. The Smithsonian has called them The Next King of the Sea. Which is a bit hierarchical, patriarchal and feudalist but you get the point! Anyways. I could tell you more, but honestly, I’m kinda busy and I haven’t even got to Monday night’s thing yet!

If you want to truly understand you can read Sophie’s fuller and more articulate explanation in her article, “Why Decentralisation Is Like Jellyfish (and Why Jellyfish Are Like Everything).

The long and the short of it is that we decided to thematically populate our MozFest space with Jellyfish models and references. And art. Jellyfish art exists and this platform has a renowned Jellyfish artist as a member. Just so you know! This all required some experiment in the construction of Jellyfish models and so we put out the call that we would use Monday evening’s monthly IRL event to do just that.

Speaking personally, as someone with virtually no ability to make anything with Hands and with zero crafty skills of any kind, I was filled with silent terror at the prospect and quietly hoped an earthquake would destroy the city before Monday came around. When that didn’t happen and the evening approached I consoled myself with Part B of the plan which was, of course, to dine together on Jelly & Fish.

My fears, I’m delighted to tell you, proved groundless on all counts. We had a lovely bunch of people turn up at criminally short notice and we all had a great time. Most unexpected fun I’ve had in a while. Sophie even roped in someone who’d just wandered into the Redmond for a glass of water and who stayed and made a marvellous white wedding-jellyfish with a level of care and diligence that was awe-inspiring.

Everyone who came made their own interpretation of what a Jellyfish might look like which meant we got an amazingly diverse and creative bunch of Medusas which added another layer of metaphorical resonance in relation to the aims of the Platform. Even I managed to assemble a passable jellyfish from a paper lantern and a bit of purple and gold fabric swiped from the vast hoard of materials Sophie has apparently had hidden in my garage for several years. And it took only about 15 minutes; “as long as that?” I imagine you asking if you actually saw it . But hey, given my starting point I was quite pleased with its undersea high ecclesiastical look – imagine a kind of gelatinous marine Bishop of Galway!

Everybody produced a really lovely variety of quite beautiful Jellies in a remarkably short time from, like, scratch. And more importantly I think it’s true to say that everyone had fun doing it. Not least because – and listen to me here cos this is important – if you intersperse any creative enterprise with a full hour of eating Fish and Chips followed by Jelly and Ice Cream accompanied by beer, wine and soft drinks, then everyone is going to have a good time and get their jelly-building juices flowing! I mean, come on, right? (And yes, especially if you remember to supply vegan equivalents where required!)

So now we have a handful of Jellyfish models made with love and fun and other stuff related to love and fun. And thanks to the all-seeing basilisk eye of Amy Gibbo, who has analysed each structure in detail, and built Jellyfish Construction Recipes for each type, we hope to have loads of you doing this over the two remaining weeks before we sail forth at the MozFest. And those of you with highly developed arty and crafty skills can, I’m as sure as a Jellyfish attacking an aircraft-carrier, produce something truly spectacular, large and brightly and colourfully lit! I’m just saying!

So a big heartfelt thanks to everyone for making it such a warm and productive evening and once more to the Redmond Centre for their amazing support.

Conditions for collaboration and all that! Right? Right? You feel me? Commons Platform in real life!

This site uses Akismet to reduce spam. Learn how your comment data is processed.