We are building the Commons Platform: a secure, decentralized social media platform which is designed to foster healthy engagement with each other and with content, and which creates the conditions for connection, collaboration and creativity.

This means that people can start to collaborate at scale, and build solutions together to local and global problems.

Those technologies can be shared across the whole network, so you could have anything from a local tool-sharing scheme to a global alternative to Uber – but which is always non-extractive so money stays in local economies. The overall aim is to create an interoperable ecosystem of community-based apps and functionality which can enable an alternative economy to benefit all people and the planet. 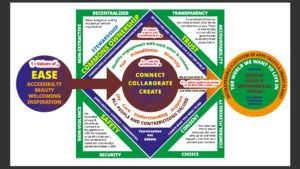 Then we developed it further through coming together in workshops to consolidate the learning, bring more people into the mix and check that it works for a huge range of different people. Some people who come to the workshops are already aware of the values, others have just arrived, but what we find is that in all of our 14 workshops so far, there has been an instinctive understanding of them, so that not everyone needs to be aware of everything that has happened at previous workshops. In fact many people have come in from zero knowledge and have fitted right in to workshops about design, tech, community standards etc

We currently have a network of over 800 people who are involved or supporting the Commons Platform in some way.

As a result, we have lots of people coming in with their own skills, personality, interests, and at any given time we have people going out, resting, just observing, in a kind of organic way – a bit like the way a jellyfish moves.

I needed to figure out how we could organise a huge and growing number of people so that every person and every group within it can organise semi-autonomously in a decentralised way –  and so that eventually Nick and myself are not needed to guide individual parts of the whole.

It’s not that I decided to see whether everything would fit the Jellyfish model, but just that each time something needed to be explained (to go from a concept in my mind to something needing to be communicated to the outside world – to move forward – the metaphor of jellyfish seemed to present itself quietly and willingly. 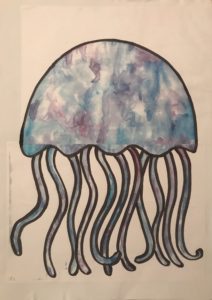 So here it is: Why decentralised organising is like Jellyfish

But, I hear you ask, how do you get enough structure without a skeleton or org chart so that the organisation (the jellyfish) retains its shape, if you don’t have a hierarchy of people?

The answer is by separating the roles from the people, by creating a living manifesto of values, by allowing anyone to become a part of that if they want to

Let me show you::

At the top, in its ‘head’ is where the values sit, made up of the people who came together to craft those values, and with the questions that prompted them (“What kind of world do you want to live in?” “What do you want to do on a platform?” and “If you could get together with millions of people worldwide to make a change, what would that change be?”)

That then feeds into the Aims, Ways of Working (creating the conditions for collaboration, creativity and healthy engagement, safety, inclusion, accessibility), Governance (how to make sure that the organisation always goes in a healthy direction of growth, transparency, evolution, and is not swayed by any personal agenda), Stewardship (how we collectively look after this commons-owned asset). These are again held by people who have helped to develop them at workshops, and people who have a good understanding, have learned about how it works through a learning framework. 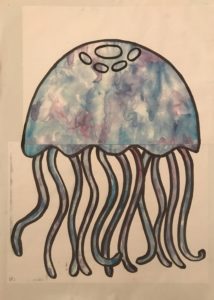 Then from that basic shape, smaller groups can be added to work on building different things, with the proviso that they have someone in them that can represent the values, aims, ways of working, governance and stewardship (it may be the same person or multiple people (and if there is nobody available from either of those groups to join the new group, one person or everyone can learn how to be a representative of them through the Commons Platform’s learning framework.)

So for example any group will as a minimum look like this:

Look familiar?  Every group, or organising unit is another jellyfish. Then the basic shape can be populated with whatever else is needed. In the case of a Commons Platform design group, it would also need to have someone from Tech, someone from Accessibility, Security, Consentful tech, interoperability, etc. to ensure that everything that is designed is compatible with the organisation and with everything else that is created.

However, importantly there is also space for new information, energy, people and experience to come in from the opening of the Jellyfish, and this is often the most important to maintain the evolution. For example, it is vitally important when talking about accessible or inclusive design that people with different accessibility requirements/needs are part of the conversation. It is also important to include the experiences and voices of people who have experienced first-hand the trolling or online abuse that is more prevalent against women or minority groups, and to be aware of impact of technologies that have inbuilt bias, so that they can co-design technologies that do not replicate those problems – problems which continually reinforce the status quo and prevent us being able to be a whole society with structures that work for everyone.

Sometimes a previously invisible perspective may be so transformative that it may prompt the aims/stewardship/ways of working/governance to change, so this is constantly fed back up into the living manifesto. (For example, we were speaking to Tiokasin Ghosthorse, a ‘baby elder’ from the Lakota Nation in Turtle Island, or the USA as it is now known, and he said “we don’t want your technologies” which is a really good point and made us have to think about the unintended consequences of technological solutions to community issues.) Perhaps it may even be the case that one of the aims, ways of working or even values may need to be changed or re-worded to make sure that nobody is being excluded or harmed by the terminology or technologies.

So then you get a whole load of jellyfish within the jellyfish that is the organisation itself: 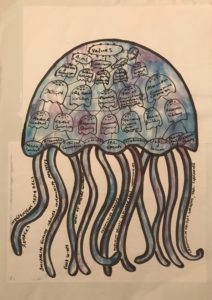 And they are all connected together so that every part of every aspect of the organisation is linked through the values.

It might look as if the values are at the ‘top’, but if we look through the underneath of the jellyfish we see that they are in the middle and that everything else is connected to them, with infinite capacity to expand in size and complexity.

Interestingly, this gives us something analogous to the E8 Lie Group which is a visual representation of a “simple theory of Everything” which attempts to describe all known fundamental interactions in physics. 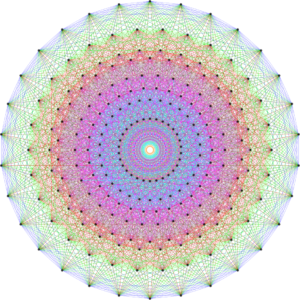 Like the ‘‘eternal Jellyfish’,  if any group becomes too large it will become unwieldy, and may split off into smaller polyps which then become their own jellyfish.

Think about how much we miss out on by not having Jellyfish organisations:

So many of the things that people do are not included in organisations – they can’t get in to those closed systems – and they also can’t get into the interlocking circles of more ‘flat’, non-hierarchical organisations.

The sea outside of the Jellyfish is vast, but probably every molecule of it has helped to grow and propel a jellyfish at some point in history – the same way that every breath of air we take has been breathed by someone else. We are sharing all of the time – even working with the trees, collaborating in wider systems to exchange oxygen and carbon dioxide without even realising. Yet in our organisations we keep out everything of value.

Perhaps now is the time to revert to the way of the natural sources, the commons of air, water, and of the resources of people who want to work together to create a world that works for everyone.

The Commons Platform is building that.